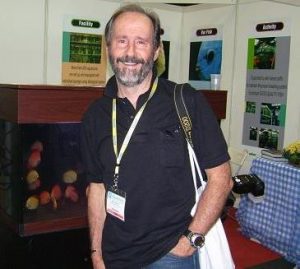 Contribution to the exploration of freshwater habitats in 217 countries and the discovery and rediscovery of over 7000 fresh and brackish water fish species, for scientific researchers, for Institutions, Universities and Museums; discoverering many new aquarium plants. Many fish and plant species are named after him

2010          Begin of yearly production of DISCUSBOOK magazine, with ewest  discoveries, biotopes, international aquatic events and seminars around the globe 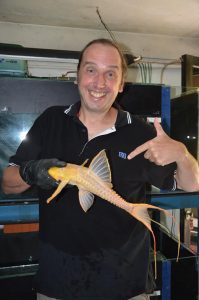 Hans – Georg Evers lives in Hamburg, Germany and is since his very early days an aquarist by heart. Starting with a community tank his interest soon specialised in African cichlids of the Lake Tanganjika and lateron West Africa. In the early eighties his main interest changed to the catfishes and until today the Corydoradinae and Loricariidae are his most favoured fish, followed by , rainbow fish, tetras and all other imaginable freshwater fishes. Hans so far bred and raised more than 450 different species of freshwater fishes in his tanks. The majority of those are the Corydoras which count to 126 different spp. actually, but also the Loricariidae with more than 40 different spp.. His recent installation consists of about 50 tanks from very small (two gallons) up to quite big ones (almost 300 gallons).

Hans Evers is a busy traveller, giving talks on fish and collecting species. He fluently speaks English, Portuguese and a bit Spanish and visited already many tropical countries in search for new and interesting fishes and invertebrates for the aquarium hobby. Countless journeys were undertaken to the Amazon, mainly to Brazil, where he collected in all bigger affluents of the Amazonas river and other parts of the huge country. So he did in Peru, Venezuela and others. Also Asian countries, mainly Indonesia and recently India have been visited quite a few times. During the last 10 years he concentrated on the Indonesian island of Sulawesi, where he collected fish and shrimps all over the island and the Indonesian part of New Guinea. He found many scientifically new species. Oryzias eversi from Sulawesi and Corydoras eversi from Brazil have been named after him.

About his experiences and findings he published 12 books, e.g. “Mergus Atlas vol. 6”, the two volumes of “Mergus catfish atlas” together with his good friend Ingo Seidel and the “Identification Guide to Corydoradinae Catfishes” with Ian Fuller, and worldwide more than 1000 articles in hobbyist magazines. Since 2005 he was the chief editor of the German aquarium magazine AMAZONAS, from 2012 on also in English language. In this magazine all new and spectacular tropical fishes, invertebrates and water plants are being promoted, including many novelties 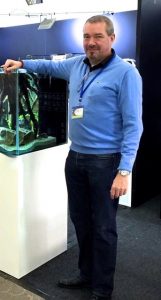 I was pleased to introduce myself.
I'm with discus than my Hobby since 45 Years. My first Discus has been with me when I was a young Boy. In the decades did build up my tank-facilities bigger and bigger. In the Top I had over 120 Tanks include more than 50.000 Liter of Water. Bred out of nature offsprings only and this with strict Strain-Breeding, but without inbreeding. Did export my Discus through out the world. The first true red-turquoise with real red and not only brown based has been breed in my tanks. This Red turquoise became worldwide famous than „Schlingmann red" The main intention of my has been all times to take care of the genetic to be able to breed real high class discus.

Over the years I was continue in closed contact with Dr. Schmidt-Focke, the best Men I met in my life! We could exchange our view in uncountable hours we had together.  I did travel for discus around the world to held speeches and did visit important events. Published uncountable articles around the world and till today trial every time to share my knowledge.
In the meantime reduced my facility to the max! Today the one and only intention of my is to keep wild discus and to breed them as they could born in the nature as well. The offsprings of my Discus are for other specialist only. They are complete free of the Discus Plague and complete free of any type of resistance Worms, Flagellates and others. During my experience I support good companies to make outstanding nature based products, test it and have every time the eye on the best possible result for the discus! 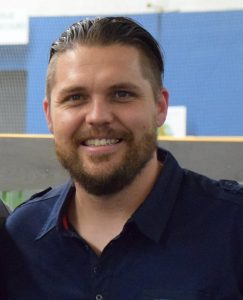 Yann Hoiret is a French discus breeder born in august 1979. He studied 6 years in the aquaculture field allowing him to work in different continental or exotic fish farms.

Since 15 years, he is the manager of a renowned pet shop. He works as an author for the French magazine AquaMag for its every issue discus section. Sometimes also collaborate with Germans discus publications.

His passion for the “king of aquariums” leads him to create in 2008 the website Fanatik-Discus.com containing numerous articles and reports.

Found of genetic and selection, this breeder specialized himself in red discus breeding forms in its small hatchery.

Generally Involve in French competitions, he was always interesting about them, following the international work of show organizations, as the selection and evolution of discus breeders.

He now regularly joins judging teams in Europe and present his work dedicated to the elaboration of clear structures for discus competitions. These in order to promote the hobby and help enthusiasts access the events or elaborate their own breeding selections. 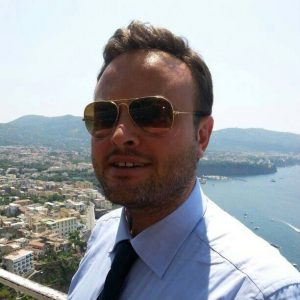 "Discus maniac from 1995. I think that see directly is better then stay in front of computer and imagine. This filosofy is my way of life. I meet hundreds breeders in 20 years. Visit the most important we have in Europe. I learn a lot by real discus masters. I sow tons of discus all over the world. I judged in Milano on 2016. Still waiting some show like Duisburg one. I know all breeders and wholesalers. European and from Asia. I imagined Napoli fair, and done it. I simply love discus. Breeding and growing. That's me." 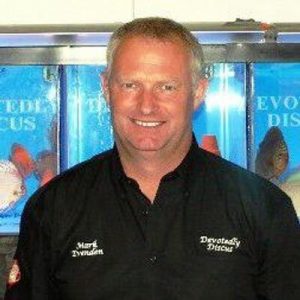 I started “Devotedly Discus” in 1993. In the early years we kept fish imported from Jack Whatley. I then met Roger Miles who introduced us to the Stendker Hatchery in Germany and we have specialised in their fish since 1996.

Running a Discus business is very much a way of life rather than a job and I enjoy it as much now as I did 21 years ago.

I have been to all the Nordic Discus shows previously and in my opinion it is with out a doubt the best show for many reasons in Europe.

It is an honour to be invited to judge the Discus and I am very much looking forward to it. 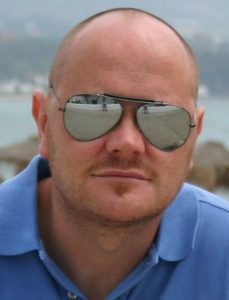 Hi, my name is Tony and I have a love for Discus. Many of the Swedish Discus Keepers will know me from my previous judging assignments in both Stockholm and Malmo.
I’ve been judging for over a decade and I’ve had the pleasure of judging across many shows in Europe and the Nordic Discus show is still one of my favourites.
I enjoy talking with other discus keepers to learn and grow my own knowledge and I am also excited to judge with some old friends and some new.
I love seeing high quality well prepared Wild Discus in shows and I believe when wild fish are prepared well they can compete with the best of domestics breeds.
Frank Tinnes 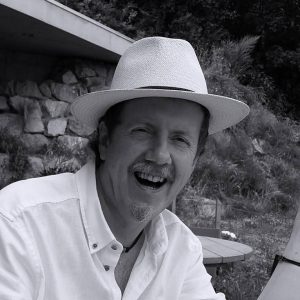 In 1973, at the age of 10, I got my first aquarium and the first fish. These were live-bearing tooth carps. Even then, I was enthusiastic about the different behaviors and the varied colors of the fish. This enthusiasm continued during my school days and my dental technician teaching, so that there were always 2-3 aquariums in my apartment. During my studies (German studies and history) I was mainly interested in the South American cichlids, especially because of their breeding behavior and their biodiversity. In 1987, I acquired my first discus. Already in 1988 I had with these first breeding successes. From then on, the king of the Amazon fascinated me so much that my aquariums became more and more numerous and the discipline of the discus, especially the strengthening of the natural colors, took up all my free time. In 1996 my business partner Hermann Sander and I opened the Diskus-Studio in Kenzingen. In 1997, at the Wilhelma Zoo in Stuttgart, I passed the examination for special knowledge according to § 11 of the Animal Welfare Act, and gradually expanded our discus sales facility, which today is located in Endingen am Kaiserstuhl. From 1999 I was able to turn my hobby into my profession. My current facility is about 12000 liters, with the priority on wild caught and their offspring. At the turn of 2012, I succeeded in breeding with Nhamunda Heckel WF. My biggest breeding success so far besides the breeding of brown and green wilds. My main aspect of the discus care is that I make the discus, especially the wils, as naturally as possible aquariums available. So all my aquariums have sand as ground, roots as fixed points and occasionally floating plants or I give branches of shrubs and trees in the basins, as I could admire it at numerous exhibitions by Heiko Bleher. In addition, all animals get "Aqua-Kraut", which I make myself, into the feed or into the water. Especially in feed, this is an excellent supplement, because if we compare the feed composition of wild discus in their natural habitats as detailed in Bleher's Discus Volume 1 with our diet, we are far too one-sided with respect to animal food and do herbal and fruit supplements certainly good for the gastrointestinal tract of the animals. In addition to “Aqua-Kraut”, I also use “Aqua-Namin” for the supply of trace elements and “Humin DSO” for enrichment with tanning and humic substances.